No lawyer? Johnson County Court has a self-help center

Let’s be clear: Going to the courthouse to file paperwork has never been anybody’s idea of a good time.

Yet one area of the Johnson County Courthouse has become known to clerks as a place with “the highest number of hugs per square foot” of any courthouse office.

That area is a help center designed to ease the frustration of people who are trying to go it without an attorney in divorces, child visitation arrangements and evictions.

People can represent themselves in family law cases

That’s a fair amount of cases, according to Johnson County District Court officials. In 2014, for example, some 620 new divorce, paternity and custody/support cases were filed by people who either did not want or couldn’t afford lawyers.

Usually, a case involves multiple filings for such things as adjustments to visitation rules, support payments and hearing date requests. In the past, that meant searching out the right forms online or from the courthouse law library and other offices, said Sandy McCurdy, clerk of district court.

That often proved frustrating and overwhelming to people who weren’t familiar with how the legal system works, she said. And it made more work for the clerks when forms weren’t filled out correctly.

In 2014, the county’s judges, clerks and court staff set up a small center with three computer terminals to help people navigate the filings. The first month, 116 people used the center. Last month the center moved into a bigger space on the first floor that had been vacated by the sheriff’s department. That month, the volume had nearly tripled to 334 people served, said District Court Judge Keven O’Grady.

Clerks at the center figure they see about a dozen clients a day.

One in five divorces with children involve people without a lawyer

The numbers may increase with the county’s population. About a third of divorce cases without children and one in five with children involve people who are not represented by a lawyer.

Often, those people are stressed out by the experience, O’Grady said. Divorce itself is already one of life’s most stressful events, he said. “Pile on top of that the stress of dealing with a very unfamiliar system and things can be overwhelming,” O’Grady said.

People who come in for hearings without the proper paperwork could be sent back to redo them, adding to lost time for them and court employees, he said. “We can work people through faster if we only have to do it once,” O’Grady said.

The center saves clients money as well as time, said McCurdy. For example, some people looking for legal help online end up paying hundreds of dollars for packets of forms issued in other states that may not be applicable in Kansas.

Court officials were able to set up the center without adding staff, O’Grady said. Clerks take turns working at the front desk. Others work in their help session between regular clerk duties.

KLS attorneys on-site on Tuesdays and Fridays to help

The clerks can help people fill out the forms, but can’t give advice about what to put on them or what legal strategy to take. However, people who meet the financial guidelines can get that kind of help from Kansas Legal Services attorneys on Tuesdays and Fridays in small rooms at the center.

The help center is modeled after a similar program in the Bronx. There are only a few others in the country. McCurdy believes it to be the first such center in Kansas.

The center adds a little more work for the clerk staff, but many find it rewarding. Clients are grateful for the information, which even includes printed advice on what to expect and how to dress in a courtroom.

“The clients are definitely very appreciative of any kind of help you can give,” said Melissa Mercer, trial court coordinator. “It’s saving everybody frustration. People are in better moods and we’re in better moods.”

Said Teresa Young, supervisor of the help center, “It’s rewarding. It makes you feel good. I don’t think we’ve had anybody walk away from here upset or mad.”

Center may expand to other types of cases

Eventually the center may expand its services to other non-criminal cases, such as collections or guardianship and conservator reports, said O’Grady.

In the meantime, the center is open from 8:30 a.m. to 5 p.m. Mondays through Fridays when the courthouse is open.  Click here to learn more about the Help Center. 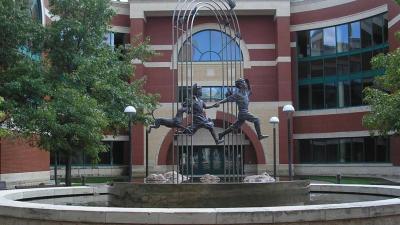