Thousands of Kansans can get legally back on the road

SB 127, new law in 2021, addresses some of the issues Kansans are facing with suspended driver’s licenses.

Governor Laura Kelly put into law legislation that seeks to address the issue of suspended driver’s licenses and make it easier for Kansans to resolve this issue.

“I’m excited. I’m excited for the thousands of Kansans it will help drive legally,” said Wichita Democrat Sen. Oletha Faust-Goudeau. “During this time, so many people are struggling. They need to get to work to take care of their families. This is an exciting day.”

SB 127 was signed by Governor Kelly in April, 2021. It had previously passed unanimously in both chambers of the Kansas Legislature. It’s an issue that has seen lawmakers in both parties working to address this predicament.

Sen. Faust-Goudeau had been one of the main champions of this legislation for a couple of years.

“I guess it shows persistence pays off. It was a bipartisan piece of legislation. So many different organizations, especially the Wichita Racial Profiling Board here in Wichita, Appleseed, so many people came on board. When we saw the data, how it affected so many,” said Sen. Faust-Goudeau.

Data collected by Kansas Legal Services showed the Kansas Department of Revenue in 2021 had more than 213,000 Kansans who have suspended licenses, and about half of those people are in Sedgwick County.

“My original reason for addressing this legislation was the young mom who had to take her young daughter who had cancer to the emergency room. One early morning, she’s driving fast down the road to get to Wesley Medical Center. She got pulled over and realized she was driving on a suspended license because it has been suspended because she couldn’t pay her car insurance. It had lapsed,” said Sen. Faust-Goudeau.

About 70 percent of those suspensions were related to debt created by a driver’s situation unable to pay fines and court fees.

“We’re dealing with COVID, and so many people have lost their jobs, and they are struggling financially, so this will help Kansas across the state.” Sen. Faust-Goudeau said, “In the past when I’ve dealt with this situation, some lawmakers, some of my colleagues in the past thought it was just going to help some of the bad characters who didn’t want to pay their fines. That’s not the case. We see that it is affecting all people of all races and especially those who have found themselves financially affected in a negative way.”

Sen. Faust-Goudeau added even with the passage of this new law, the work to address this issue still requires more work in the future to reform the system so that a person’s inability to pay isn’t a cause for someone to have their driver’s licenses suspended along with some car insurance issues.

She also said if people do receive a citation to look at the back of that piece of paper and there will be a number on there, people can call to set up payment plans.

The suspended driver’s licenses are just one part of this new law.

Commercial Driver’s Licenses become renewable online for most of these license holders.

The age for renewal of licenses online raises from under 50 to under 65. 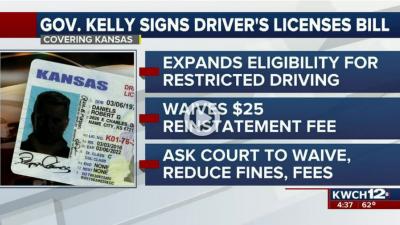